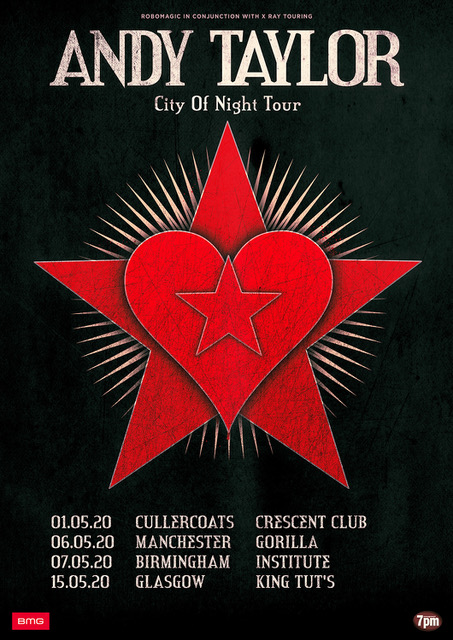 Andy Taylor has made his impression in pop as both a guitarist and songwriter, penning some of the greatest hits from Duran Duran, The Power Station, Robert Palmer, The Almighty Thunder, and The Ting Tings, to name a few. Now he’s advancing on an intimate UK tour in May to promote his new solo venture.

This news follows the recent release of Love Or Liberation, a song written by Taylor and Ricky Warwick (Black Star Riders, Thin Lizzy and The Almighty who Andy produced in the ’90s), featuring the vocal talent of Reef’s Gary Stringer as well as having Arya Goggin from Skindred on drums, and Paul Turner from Jamiroquai on bass.

As well as appearing at several key venues throughout the UK, Taylor is set to play a very special show in his hometown – Cullercoats, Tynemouth. When talking about the show, he said: ‘It was exactly 40 years in May 1980 when I left Cullercoats and started Duran Duran, so in my heart I felt that going back to Cullercoats, to the club my grandfather co-founded and where it all began for me, seemed like the right thing to do – and me Nan would haunt me if I missed her out!’

Andy Taylor is set to tour in May 2020 to a limited number of venues. Click here to order your tickets.